Cryptocurrency is any kind of currency in digital or virtual form; To protect transactions in cryptocurrency, encryption (cryptography) is used. There is no central authority to issue or regulate cryptocurrencies. A decentralized system is used to record transactions and issue new units.

What is a cryptocurrency?

The first cryptocurrency was bitcoin, created in 2009 and the most famous to date. Cryptocurrency trading is interesting in terms of making a profit; as a result of speculative activities, price jumps for cryptocurrencies are periodically observed.

How is cryptocurrency applied?

Cryptocurrencies are processed in a distributed public registry – a blockchain, where records of all transactions are stored, updated by currency holders.

Cryptocurrency units (coins) are created during the mining process. This is a process in which the computing power of a computer is used to solve complex mathematical problems, as a result of which coins are generated. Users can also buy currency from brokers and then store and spend it using cryptographic wallets.

Cryptocurrency is not a material object, it is a key that allows you to move a record or unit of measure from one person to another without a trusted third party.

Bitcoin has been around since 2009, but financially, cryptocurrencies and the application of blockchain technology are still in their infancy; their rapid development is expected in the future. In the future, cryptocurrencies can be used in trading transactions with stocks, bonds and other financial assets. 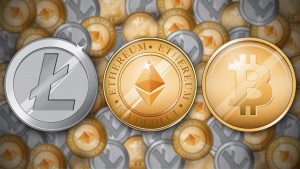 There are thousands of cryptocurrencies. The most famous of them are listed below:

Bitcoin, created in 2009, became the first cryptocurrency and still retains the highest popularity. The currency was designed by Satoshi Nakamoto and is believed to be a pseudonym for a person or group of people, while the exact identity of the developer remains unknown.

The Ethereum blockchain platform was developed in 2015. It has its own cryptocurrency Ether (ETH) or Ethereum. It is the most popular cryptocurrency after bitcoin.

This currency is most similar to bitcoin, but innovations such as faster payments and processes that allow more transactions are more quickly developed in it.

Ripple is a distributed ledger system founded in 2012. Ripple can be used to track many different types of transactions, not just cryptocurrencies. The Ripple platform developer has worked with various banks and financial institutions.

Cryptocurrencies other than bitcoin are collectively referred to as “altcoins” to distinguish them from the original.